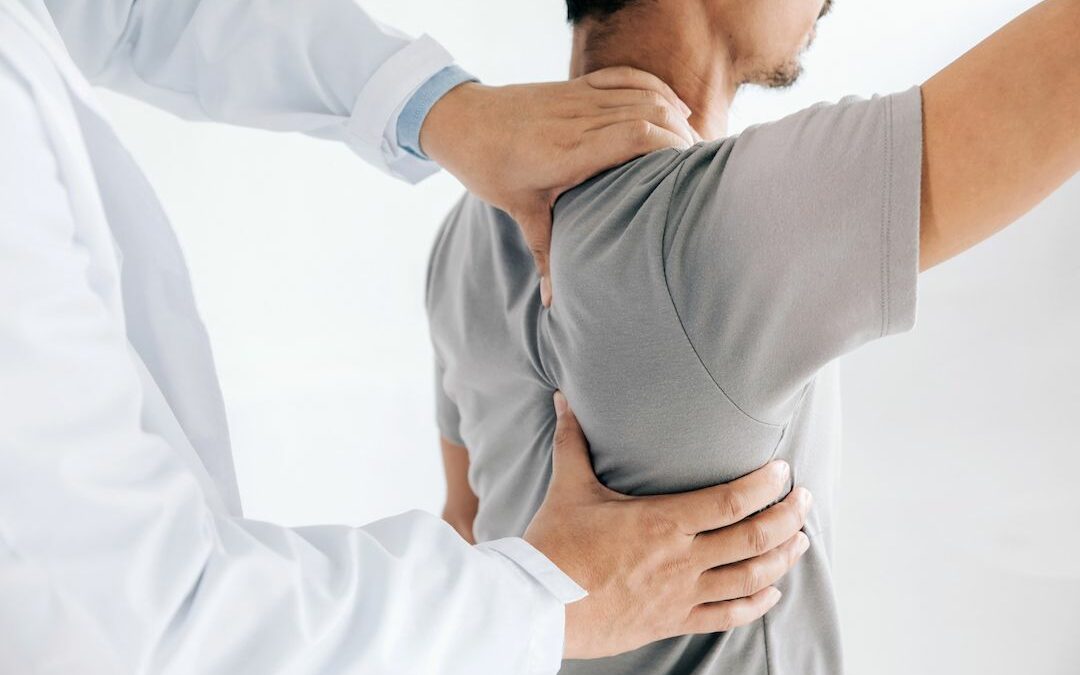 Now I had never been to a Sugar Land Chiropractors off before so I did not know what to expect. Upon arriving to the Sugar Land Chiropractors office we given a new patient packet to fill out. After filling out the new patient packet I was taken to an exam room for an exam by the chiropractic doctor. He checked my blood pressure and we went over where I was having soreness and any other issue I would possibly be having. Then, I was taken to a physical therapy room and we went over to some exercises and stretches. We did some exercises on a ball, against the wall and some laying down on a mat. Once we were done with the physical therapy exercises I was taken to another room. I was told to remove my shirt and bra and was given a hospital gown to wear.

I was told to leave it untied from the back as well. Then came in a physical therapist and told me to lay flat faced down on the table and she applied some patches on my back. These patches are known as E-Stim. I could feel the patches doing some work on my back and as she would turn the machine knob up higher and higher. This was nothing painful but it was something new to me. She then left the room and I continued to lay as the machines did its work. Once it was all done the physical therapist then came back into the room and applied some warm, blue gel and started to do a massage on me near my shoulder area.

She explained to me that this was the ultrasound machine working on my shoulders. Now again, I did not feel any pain while she was giving me a massage with the ultrasound. All in all with the E-Stim and Ultrasound it took about 18min to do both. It was something so simple done quick. At this point of my visit I started to think different about Sugar Land Chiropractors offices. I could already fell a huge difference since the moment I walked into the door. I wondered to myself why had I not visited a Sugar Land Chiropractors office before. The pain that I had felt after the car accident had gone down dramatically after the first couple of treatments.

After my E-Stim and ultrasound I was then told to change back into my shirt I was wearing when I had arrived. I was then taken to a room with a bed and was told to lay flat on my back. The physical therapist then turned the bed on and I felt like a roller inside the bed moving up and down. It started from my shoulder area then rolled down towards my back, lower back. Back of my legs to my ankles. I had never felt anything like it before. It kind of tickled at first but at the felt time it felt really good. I had never seen or heard of anything like it before. It was quite interesting.

The whole bed treatment lasted about 10 minutes. You could almost fall asleep on how good it felt. Once we were done with all that the physical therapist then came back in and took me the exam room I had originally seen the doctor at the beginning of my visit. The chiropractor doctor then came into the room and asked me how had I been feeling now after all those treatments. I told him that I had felt a drastic difference now then the moment I had felt when I first walked into the Sugar Land Chiropractors office.

He then proceeded to tell me that he would be doing the final treatment of my visit which would be called an adjustment. This was a bit more scary however it was not painful at all. The only thing that happened was I got startled but that was it. Once we were done with that, which only took about 2 min, we went over my treatment plan and what we would be doing. The Chiropractic doctor told me I would have to continue to come at least three times and week and then we could bring it back to two or one time a week.

One thing I do know for a fact is that visiting the Sugar Land Chiropractors office had been one of the best things I could have done after my car accident. Now till today every time I see or know of someone who had been in a motor vehicle collision I make sure to refer them to a Sugar Land Chiropractors office. I want them to feel the amazing difference I felt myself.